It does not help that the most recent symbol of the Fifth Amendment is The Joker:

There has been plenty of news coverage about Martin Shkreli, “pharma bro” and alleged securities fraudster, and his appearance before Congress.  (Examples are here, here and here).   The proceeding itself was snarky, entertaining and time-wasting:

Congressional testimony is political theater, no more and no less, but some observations are in order for us non-Joker citizens, as well.

As a refresher, it never hurts to take a look at what the Constitution actually says:

No person shall be held to answer for a capital, or otherwise infamous crime, unless on a presentment or indictment of a grand jury, except in cases arising in the land or naval forces, or in the militia, when in actual service in time of war or public danger; nor shall any person be subject for the same offense to be twice put in jeopardy of life or limb; nor shall be compelled in any criminal case to be a witness against himself, nor be deprived of life, liberty, or property, without due process of law; nor shall private property be taken for public use, without just compensation.

White-collar lawyer Sara Kropf has an excellent post here on Shkreli’s invocation of his Fifth Amendment rights.  She notes:

Congress does this All. The. Time. And every time it is a colossal waste of time and taxpayer dollars. If Congress wants to investigate drug prices, then do that. But don’t haul someone before a committee to testify, knowing that he will take the Fifth. It’s a constitutional right, for goodness’ sake. There’s an ongoing criminal investigation, and any lawyer worth her salt would tell him to take it.

Read the entire post: Why Does Congress Put Witnesses Through This Charade?

Law professor, former AUSA and blogger Randall Eliason has an extensive piece here about various aspects of the Shkreli saga:

Shkreli’s attorney made it clear in advance of the hearing that Shkreli would invoke his Fifth Amendment right against self-incrimination. That was no surprise. Even though the hearing was not specifically about Shkreli’s criminal case, there would be too much risk that something he said might end up facilitating his own prosecution. Almost any lawyer would likely give him the same advice.

Shkreli’s lawyer asked that his client be excused from attending the hearing, since he was not going to be able to answer questions. But Congress insisted that he appear, threatening him with additional criminal sanctions if he ignored the subpoena. And so, in a familiar Washington theater production, Shkreli sat before the committee, with his attorney in the “I am not a potted plant” seat directly behind him, and repeatedly invoked his right to remain silent in response to every question.

For corporations, executives and businesspersons of all stripes, there is a great deal to learn from Congressional investigations:

As the former Special Counsel to House Committee on Banking and Financial Services for the Whitewater investigation involving President and Mrs. Clinton,  I have written before about the perils (and weirdnesses) of Congressional testimony: Lessons From An Ex-Congressional Lawyer:

Although the Congress respects constitutional privileges (e.g., the Fifth Amendment privilege against self-incrimination), it does not officially recognize common-law protections such as the attorney-client privilege or the work-product doctrine.  Rather, many committees will often take the position that recognition of such privileges is discretionary with the committee.  As a practical matter, however, committee counsel and staff will often accept a well-grounded privilege claim.  Companies that are the target of major parallel investigations will often waive common-law privilege, either to show good faith and cooperation, or as part of a settlement with the government.

Unlike a criminal defendant, a witness before a Congressional committee cannot refuse to testify altogether, but  must rather invoke the privilege in response to specific questions.

Remarkably, the theater can be simultaneously stressful and boring:

Because most people are familiar with Congressional investigations only through television, they assume that if they are caught up in an investigation they will be summoned to testify before a committee like John Dean or Oliver North, with cameras clicking amid vigorous partisan drama.  Although your client may indeed be called to testify in a public hearing — and you should prepare as though your client will be called — it is more likely that constraints of time, the demands of the media, and political pressure and compromise having little to do with your client will result in your client never being called.  If your client testifies, remember that in many instances the committee members’ “questions” are not actually designed to elicit information from the witness.  Rather, questioning is often more like speech-making designed to maximize camera time on the questioner or to score political points against the opposition.

Despite Mr. Shkreli’s cartoonish image – and it may be nothing more than that, just an image – there is something refreshing when one witnesses defiance, with constitutional grounding, in the face of massed political power. The Members’ frustration arose not so much from Shkreli’s attitude as from the fact that the Members knew they lacked the political will to actually hold him in contempt (and then to try and convince the United States Attorney for the District of Columbia to prosecute him).

That lack of will, coupled with the fact that Congressional hearings are political theater, means that such events are not the best teaching grounds for lawyers or clients.  Nevertheless, we can all learn a few lessons from Mr. Shkreli.

First, don’t be a chicken about keeping your mouth shut: your business, your family and your liberty depend on it.  People in business, whether senior executives, middle managers or line employees, recoil from the notion of refusing to answer questions from any representative of the Government (including Members of Congress).  Separately, I have elsewhere described this impulse as The Efrem Zimbalist, Jr. Syndrome:

“Everyone will think I did it” is a common theme, as is “I can just explain it so they can understand it.”  The former statement is likely true, but it is irrelevant if you can avoid prison or a business-crippling indictment, fine or government-contracting debarment.  The latter statement is almost never true: by the time a Government agent wants your statement, he or she already has a pretty good idea of what he or she understands.

Second, in declining to speak to the Government, be civil and professional, but cool.  “Cool” not like, say, Miles Davis, but “cool” as in “calm” or “settled.”  Investigators, agents and regulators can be very persistent and can make you feel as if it’s un-American to not speak with them.

Third, follow your lawyer’s instructions.  It is surprising how many otherwise prudent, savvy businesspeople will keep talking after their lawyer has counseled them to not do so.  In the Times video embedded above, even Mr. Shkreli says that he he will follow his lawyer’s advice.

Go thou forth and do likewise. 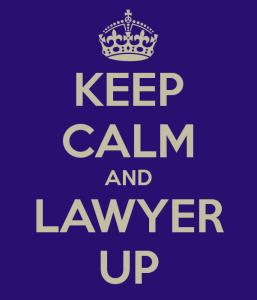