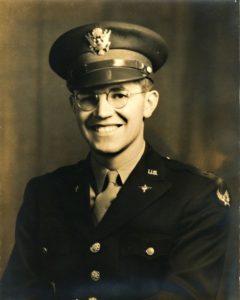 At age 61, I am now nine years older than my father was when he died.

For many years, I rarely thought of Daddy.  Primarily, I thought about him every January 6, the anniversary of the day he died. Annually, this was a day upon which my mother and I had the same conversation, rehearsed and hushed.  I loved him, and one might expect me to have thought of him more often, to have honored him, but I did not, at least not until recently.  Before you draw too many conclusions, though, bear in mind that I could not see him clearly.

Have you ever looked through the wrong end of a telescope?  The object at which you gaze looks tiny, and slightly blurred at the edges.  The object – a tree, a person – is as impossibly distant as the moon is impossibly close when you turn the telescope the right way around.  When my father died, I had just turned twelve.  Although precocious in some ways, I saw him with a child’s eyes, and never after that did my eyes change, at least the eyes with which I saw him.  Time passed; I aged, and everything around me changed and aged; but not the eyes with which I struggled to see him.  Time passed, but my eyes for my father remained unchanged, a child’s eyes in man’s body.  I went further and further down the wrong end of the telescope.

It was only when I became a father, and then approached his death-age and surpassed it, did I understand a little better who he was, and that I could quicken with memory that tiny figure moving in sepia grace at the wrong end of the telescope.

Memory is a treacherous thing, and no less so than between father and son.  The danger is in adopting someone else’s memories – my mother’s, for example, who died at age 93 but was singular in her devotion to Daddy.  My own memories, though, I need to sift and poke through.

He was a CPA, but he and his brother also owned an ice-cream store, a Baskin-Robbins at a mall (which, in Tuscaloosa, Alabama in 1970 was as fancy as some craft-made superpremium exotic would be today).  At times, we would skip church on Sunday morning so that he could go to the store and take inventory.  The mall was empty and silent, and the walk-in commercial freezer blew out white cold air like some massive Antarctic creature.

One night, he and I went out to the mall on a store-errand.  I was probably ten.  A conservative man, both politically and financially, my father drove a Volkswagen Beetle.  The evening was warm, and I cracked my window to let in a breeze.  We got out, went to the store, came back to the parking place and discovered the car gone.  Although I had dutifully locked the car door, I had failed to roll the window back up completely.  At the time, in the twilight of the hippies, “dune buggies” were in great demand.  (Admit it – When was the last time you heard of a dune buggy?)  Volkswagen Beetles were ideal to be stripped-down and turned into dune buggies, the police told us.  They theorized that the thieves had been able to slip a twisted metal coat-hanger into the gap in the window I had left open; pull up the lock; and gain access.

I was embarrassed, devastated and fearful at the prospect of forcing my father to pay for a new car, even if insurance was available.  (He had taken a staff job at the University of Alabama which, I figured out later, paid less than his previous, private-company job).  He never got mad about the Beetle, never blamed me and never considered it anything other than an unfortunate event.  I was grateful and did not know how to express my gratitude.

Gratitude is not my strongest quality, and there were other things for which to be grateful.  There was a trip to Acapulco: we played tennis, and the breakfast pancakes had Mexican chocolate in them.  My tennis career was budding, and he hired a contractor to build a cinder-block backboard on one side of the driveway, painted dark green the way I imagined the high walls at Wimbledon might be.  There was a beach trip to Destin, Florida.  The motel where we stayed had a bar and, one afternoon when I went to get some ice from the sweating ice machine, I passed the bar.  The band was rehearsing: “Jeremiah Was A Bullfrog,” by Three Dog Night.  Also, Daddy had been a high school basketball player, and he encouraged my (undistinguished) play in the downtown YMCA youth league.

That was the day he died, the Saturday of a Y basketball game.  The day was cold and clear.  He watched my game and brought me home (in yet another Beetle, this one green).  After my shower, I built a fire in the coal grate.  (An oddity, coal fires, but the house was old and the fireplace built for coal.  Some people do not like coal fires.  As a child, I loved them.  Pockets of gas would escape and explode in blues and purples around the black coals, demons escaping from rock).

Daddy had complained of nausea and went to lie down in my parents’ bedroom.  I got the fire into a good, colorful roar.  The demons were looking good.  My mother must have known how impressed I was with my fire-making skills, and she helped my father up to the living room to see my handiwork.  Something was amiss.  Even I knew something was amiss when all he could do – he who was usually so effusive in praise for me – was to nod and murmur something I do not remember.

He went back to the bedroom, I went back to watching the purple and blue demons crack and jump from coal to coal.  There was a commotion, my mother cried out and I ran down the hall towards their bedroom.  No Daddy.  My mother was saying something about He fell, and she was on the phone.  My words and hers all run together now.

But my mother was talking into the phone.  I took a breath, stepped around her and looked into their bathroom.

My father was in his bathrobe, sitting in the empty tub, his legs hooked over the edge of the tub, feet dangling.  (Later, it was surmised he had gone into the bathroom, thinking he would throw up; had sat on the edge of the tub; and had tumbled backwards  into the empty tub when the heart attack hit).  His eyes were shut, but he was making a chuck-chuck noise through his nose, a violent snuffling.  His right arm rose in the air, as though one of the little coal-demons were yanking it upwards with thread.

Perhaps he was dying at the moment; perhaps it was a body in some sort of death throes.  (I do not know and never asked.  The doctors gave us the obligatory He-never-felt-a-thing, which I doubted even then).

My mother had called the ambulance.  Perhaps she knew full well and did not want me to see.  She told me to go out the front door and look for the ambulance.  Which, to my relief and shame, I ran and did.

Neighbors, food, flowers, funeral.  My parents had many friends, and the house was filled with flowers.  To this day, I cannot abide the smell of flowers.

That was forty-six years ago.  What to make of it this Father’s Day, for your benefit or mine?

Perhaps we only understand aspects of ourselves when we understand aspects of our fathers, and the latter understanding comes only with time.  My time was ambered – that backwards-telescope problem – but now, with my own children, I can see my face in theirs and, more than ever before, Daddy’s face in mine.  I appreciate, perhaps, what he might have been thinking about a job, a child, the future.

And perhaps we only look into a father’s face when enough time has passed to get us to the same age as he, so to speak: the same age as when something happened to you as a child, something critical or weird or shameful.  I was afraid at his death, fearful watching it, impotent.  No Boy Scout, me.  Guilt at not doing something Boy Scout-like.  Mouth-to-mouth?  Some kind of pounding on his chest?  Getting in the tub and holding him until he died?

Whatever it was I should have done, I failed to do it.

I believe the Gospel, and so I believe that he and I will meet again.  Sometimes, over the years, I have been terrified that he will judge me for my failure, there in a dying man’s bathroom in 1973.  What a judgment upon me that would be, would it not?

Yet now I am older than he was on that day, and the telescope seems to distort his memory less now than it did before.  Peculiar, isn’t it?  Now, when I fear his judgment, memory replays how my failure to close that window caused that Beetle to get stolen, and how he acted towards his child.

True, someone got their dune buggy out of it.  All I got was love.

[NOTE: this post was originally published in 2014 and has been updated]