We avoid sentimentality, but the culture is awash in it on Valentine’s Day.  This “holiday” is not traditionally associated with business crime, but we will do our best.  The day is sometimes associated with alcohol, and this year happens to fall on a Friday.  We acquit ourselves well in this latter regard.

Here’s a story about the February 14, 1929 slaughter from the Chicago Tribune:  the St. Valentine’s Day Massacre:

On this frigid morning, in an unheated brick garage at 2122 N. Clark St., seven men were lined up against a whitewashed wall and pumped with 90 bullets from submachine guns, shotguns and a revolver. It was the most infamous of all gangland slayings in America, and it savagely achieved its purpose–the elimination of the last challenge to Al Capone for the mantle of crime boss in Chicago. By 1929, Capone’s only real threat was George “Bugs” Moran, who headed his own gang and what was left of Dion O’Banion’s band of bootleggers. Moran had long despised Capone, mockingly referring to him as “The Beast.”

At about 10:30 a.m., four men burst into the SMC Cartage Co. garage that Moran used for his illegal business. Two of the men were dressed as police officers. The quartet presumably announced a raid and ordered the seven men inside the garage to line up against a wall. Then they opened fire. Witnesses, alerted by the rat-a-tat staccato of submachine guns, watched as the gunmen sped off in a black Cadillac touring car that looked like the kind police used, complete with siren, gong and rifle rack.The victims, killed outright or left dying in the garage, included Frank “Hock” Gusenberg, Moran’s enforcer, and his brother, Peter “Goosy” Gusenberg. Four of the other victims were Moran gangsters, but the seventh dead man was Dr. Reinhardt Schwimmer, an optician who cavorted with criminals for thrills. Missing that morning was Capone’s prize, Moran, who slept in.

Capone missed the excitement too. Vacationing at his retreat at Palm Island, Fla., he had an alibi for his whereabouts and disclaimed knowledge of the coldblooded killings. Few believed him. No one ever went to jail for pulling a trigger in the Clark Street garage, which was demolished in 1967.

We’ve seen internal investigations that look worse.  As in the white-collar context, do not give the Government an unrelated reason to investigate you:

The St. Valentine’s Day Massacre on February 14, 1929, might be regarded as the culminating violence of the Chicago gang era, as seven members or associates of the “Bugs” Moran mob were machine-gunned against a garage wall by rivals posing as police. The massacre was generally ascribed to the Capone mob, although Al himself was in Florida.

The investigative jurisdiction of the Bureau of Investigation during the 1920s and early 1930s was more limited than it is now, and the gang warfare and depredations of the period were not within the Bureau’s investigative authority.

The Bureau’s investigation of Al Capone arose from his reluctance to appear before a federal grand jury on March 12, 1929 in response to a subpoena. On March 11, his lawyers formally filed for postponement of his appearance, submitting a physician’s affidavit dated March 5, which attested that Capone had been suffering from bronchial pneumonia in Miami, had been confined to bed from January 13 to February 23, and that it would be dangerous to Capone’s health to travel to Chicago. His appearance date before the grand jury was re-set for March 20.

On request of the U.S. Attorney’s Office, Bureau of Investigation agents obtained statements to the effect that Capone had attended race tracks in the Miami area, that he had made a plane trip to Bimini

and a cruise to Nassau, that he had been interviewed at the office of the Dade County Solicitor, and that he had appeared in good health on each of those occasions.

As we know, Capone was ultimately convicted of tax evasion.

More urgently, and as Papa Hemingway and Al Capone would doubtless approve, here is a roundup of recent cocktail notes of interest.

From the Boston Herald, the Dorothy Parker American Gin martini (from Harding’s in Manhattan). 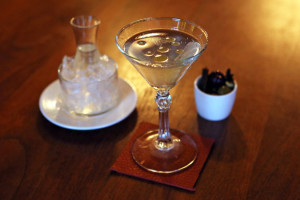 Keep the olives on the side.

The Boston Globe has ten cocktails you are not ordering but should be.  I am unconvinced, but a couple are worthwhile:

The Martinez: Consider it the grandfather to the martini, or at least its classy next door neighbor. Typically a combination of Old Tom gin, sweet vermouth, maraschino liqueur, Angostura bitters, but there are variations and improvements out there. Order if you love Manhattans, but would like to take a step to the left.

For a bar in a New York restaurant, I would love to try Del Posto, an elegant space with cocktails to match.  And, as a general drinking reference for grown-up cocktails, try A Quiet Drink, which presents “bars and restaurants where one can have grown-up conversation over a good drink.”

Finally, one cannot leave the subject of a quiet drink without thinking of the private-eye novel that made Dennis Lehane‘s name, A Drink Before the War (1994).  Lehane is superb, and Drink the best place to start.